Breaking News
Home / Companies / The importance of diversity in images…

The importance of diversity in images…

Most marketers and organization leaders would agree that diversity and inclusion matter for company performance. Statistics reveal that the more diverse a company is, the better its profitability.

But beyond profitability, diversity in marketing is important, affecting how consumers perceive a brand and possibly even how they perceive themselves and others.

For this reason, it’s crucial that marketers prioritize diversity in their campaigns, especially when it comes to the images they use.

What does diversity in images mean?

It’s important to have a complete, nuanced understanding of diversity, especially as it applies to choosing images for your marketing and branding.

A common myth is that diversity refers exclusively to diversity of race and gender. However, while diverse race and gender are certainly a part of true diversity, it expands beyond that. True diversity in images includes representation from people of different races, gender identity, socio-economic status, age, disability, sexual orientation, culture, and more.

More than mere representation, diversity also requires showing individuals as humans first — rather than a representation of a group. That is, recognizing difference without implying that anyone is superior or inferior to anyone else.

This also includes avoiding tokenization. As Vanderbilt University defines it, tokenization is “the practice of doing something (such as hiring a person who belongs to a minority group) only to prevent criticism and give the appearance that people are being treated fairly.”

With this definition in mind, we can now explore why it’s important to have diversity in your images.

Images in marketing, media, and advertising have implications beyond the brand itself. These images shape our culture’s perception of reality, of what’s “normal” and what’s not.

When images lack diversity (showing, perhaps, only one person among many who is not white, able-bodied, thin, young, straight, and cis-gendered), the effects are far-reaching.

As Jenny Dorsey and Addy Zou recently wrote in Studio ATAO, “People with marginalized identities are taught from an early age that there is room for only one of their kind in any given space.”

Let’s take a closer look at why non-diverse images are harmful.

The United States is becoming more culturally diverse every day, yet diversity is still lagging in marketing imagery. The majority of marketing doesn’t accurately reflect the reality of the diversity of the North American population.

And this lack of diversity in marketing extends beyond race, ethnicity, and culture. For example, 15% of the world population has a disability, but people with disabilities are portrayed in only 2% of media images.

Similarly, though data shows that searches for transgender representation in stock photo websites has starkly increased, only three photos on top stock image websites showed transgender people engaging in everyday activities the way cisgendered people are shown. Instead, the top image results did not show the face of the person at all.

Statistics like these reveal a common theme in marketing images: White, able-bodied, thin, young, straight, and cisgendered people are over-represented, while others are underrepresented or are tokenized (or both).

Lack of diversity in marketing and media images has real-life consequences for everyone observing them — which is nearly every member of our society.

Theories suggest stereotypes are formed based on a collective observation of everyday life. And since Americans spend an average of 3-4 hours per day looking at TV or smart phones, much of our observations are dictated by representation there.

In other words, what we see in marketing and media shapes how we view the world and the people inside it. If marketing and media images lack diversity, perpetuate stereotypes, or tokenize individuals, many of us will internalize those ideas as indicative of reality.

As to how this affects lives, we can look to a recent study that found the self-esteem of girls and Black children of both genders decreases as TV consumption increases, but the reverse is true for white male children. The researchers concluded that how and how often your demographic is represented in the media directly impacts how you feel about yourself.

White male children, frequently shown images of heroes that look like them (think: Superman, Batman, Luke Skywalker), may internalize that confidence. Conversely, girls and children of color, with half as many positive images in the media, may internalize the idea that they are not as valuable or capable.

It’s very likely that your consumer base desires to see diversity in your marketing.

Another survey found that “nearly 80 percent of consumers globally said they expect that brands demonstrate a consistent commitment to inclusivity and diversity in their advertising.”

Importantly, this survey uncovered that the majority of consumers are sophisticated in their understanding of diversity — they see through surface-level tokenism and prefer a thoughtful approach to diversity and inclusion.

How to include diverse images in your marketing

It’s clear that marketers should prioritize diversity in their images. However, as we’ve seen, diverse images go beyond simply including non-white people in your photoshoots or stock images.

Here are some strategies for making sure your images are truly diverse:

Including diverse subjects isn’t enough. Images should also not reinforce a stereotypical version of the subject.

With Vice’s release of the Gender Spectrum Collection of stock images, the media company outlined a helpful guide for how to ensure images don’t perpetuate stereotypes:

“Understanding the stereotypes and tropes that have accompanied transgender media representation—such as trans subjects being cast only as sex workers, portrayed solely in states of apparent victimhood or crisis, and being characterized as deceptive and mentally unstable—can help you to avoid them. If your usage of one of these photos could feed into a stereotype or negative stigma, you probably shouldn’t use it.”

Though this statement refers to the trans community, the principle can be applied to every aspect of diversity and inclusion: Understand the stereotypes of how different groups have historically been portrayed, and then take care to not choose images that reflect the stereotype.

For example, portraying a disabled person in a hospital gown or with a sad, lonely expression reinforces the stereotype that disabled people are tragic anomalies incapable of a healthy and happy existence. The image below is an example of one such stereotypical stock image: 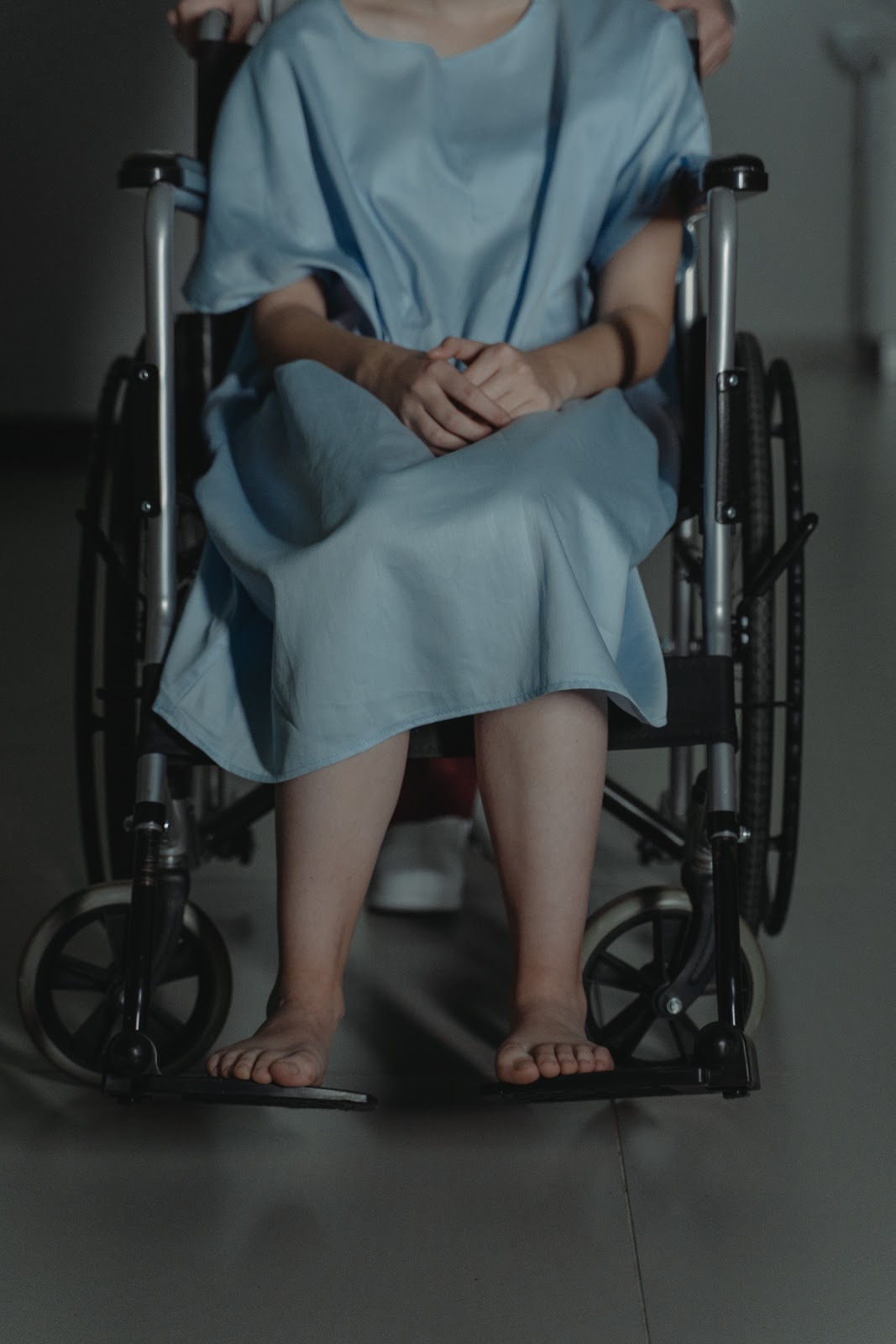 Instead, opt for an image that portrays a disabled person as they exist in reality, as happy, social, and productive members of society, just as able-bodied people. The image below from our partner Unsplash, is a great example of an image that does not perpetuate negative stereotypes: 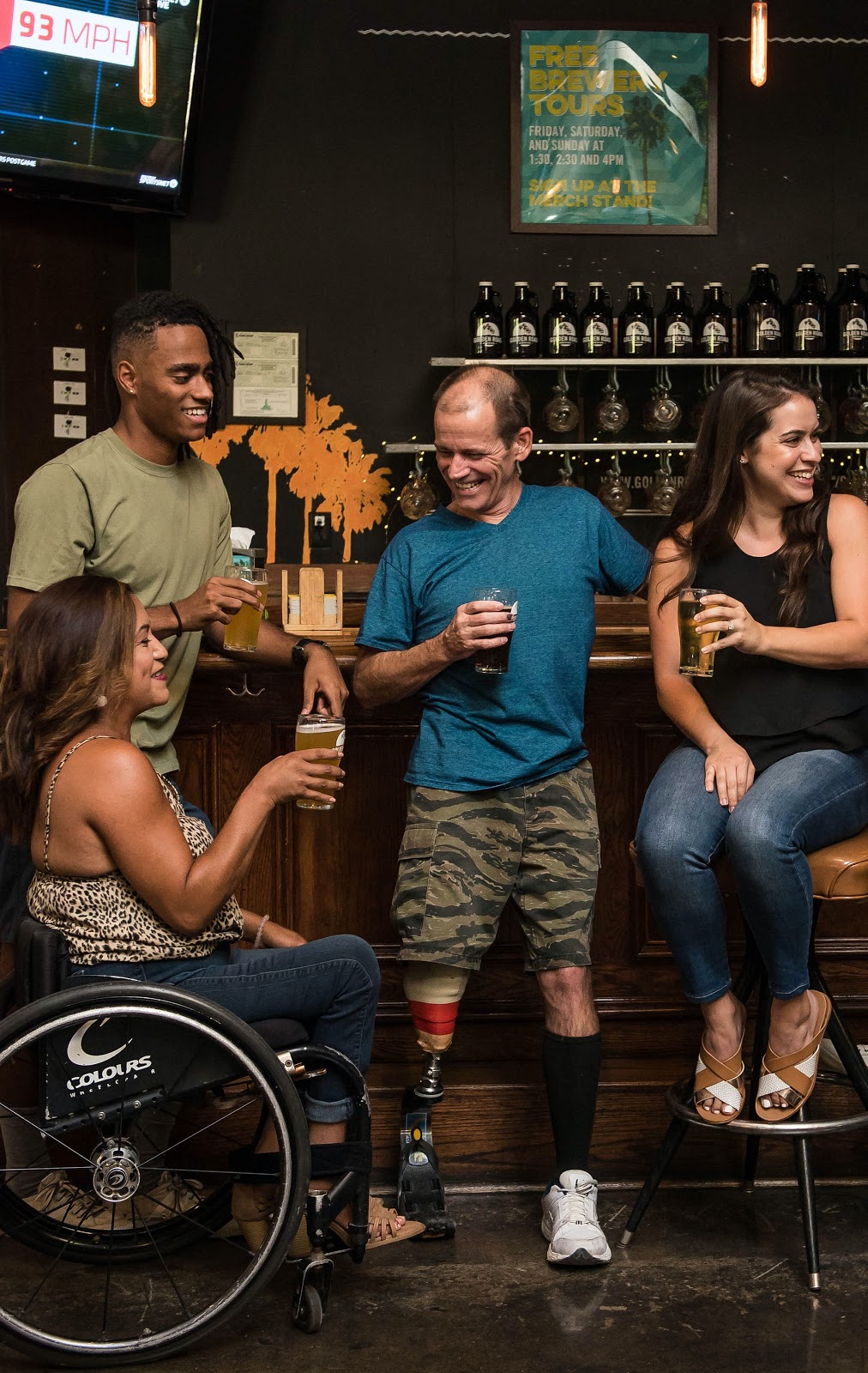 Part of true diversity in images involves the context of the subject.

It’s important to choose images that show subjects in a variety of settings or real-life scenes (at a restaurant, at work, with friends, etc.) rather than posed and non-contextual (in front of a blank wall, face blurred, alone, etc.).

For example, the image below is not a truly diverse image: It shows a group of white, young, cis-gendered, and able-bodied people engaging in a discussion at work, while one person of color looks on in the background. 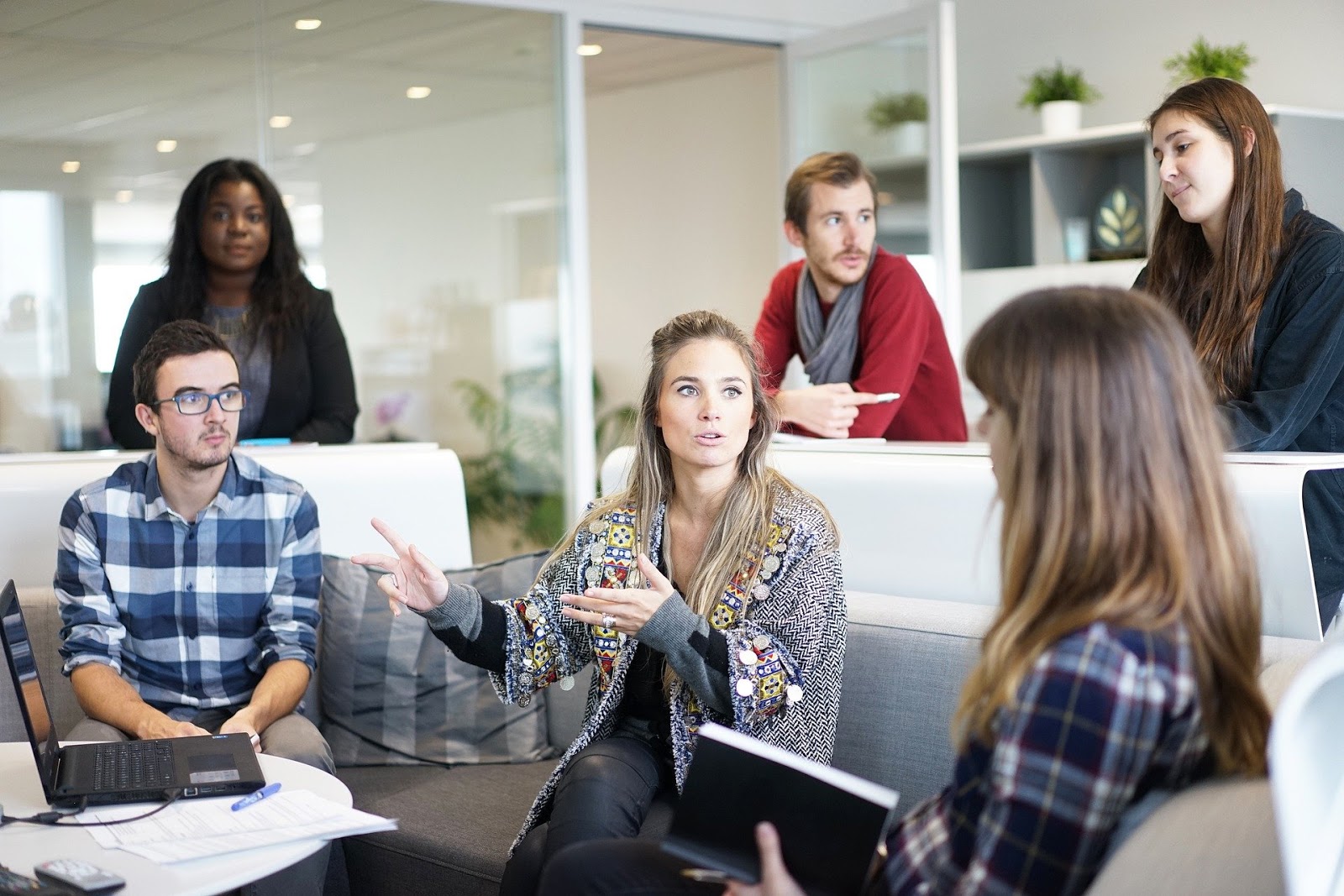 By contrast, this image by Unsplash shows a more diverse workplace setting: The group includes a variety of different races, genders, and ages, and no one is portrayed as inferior to anyone else. 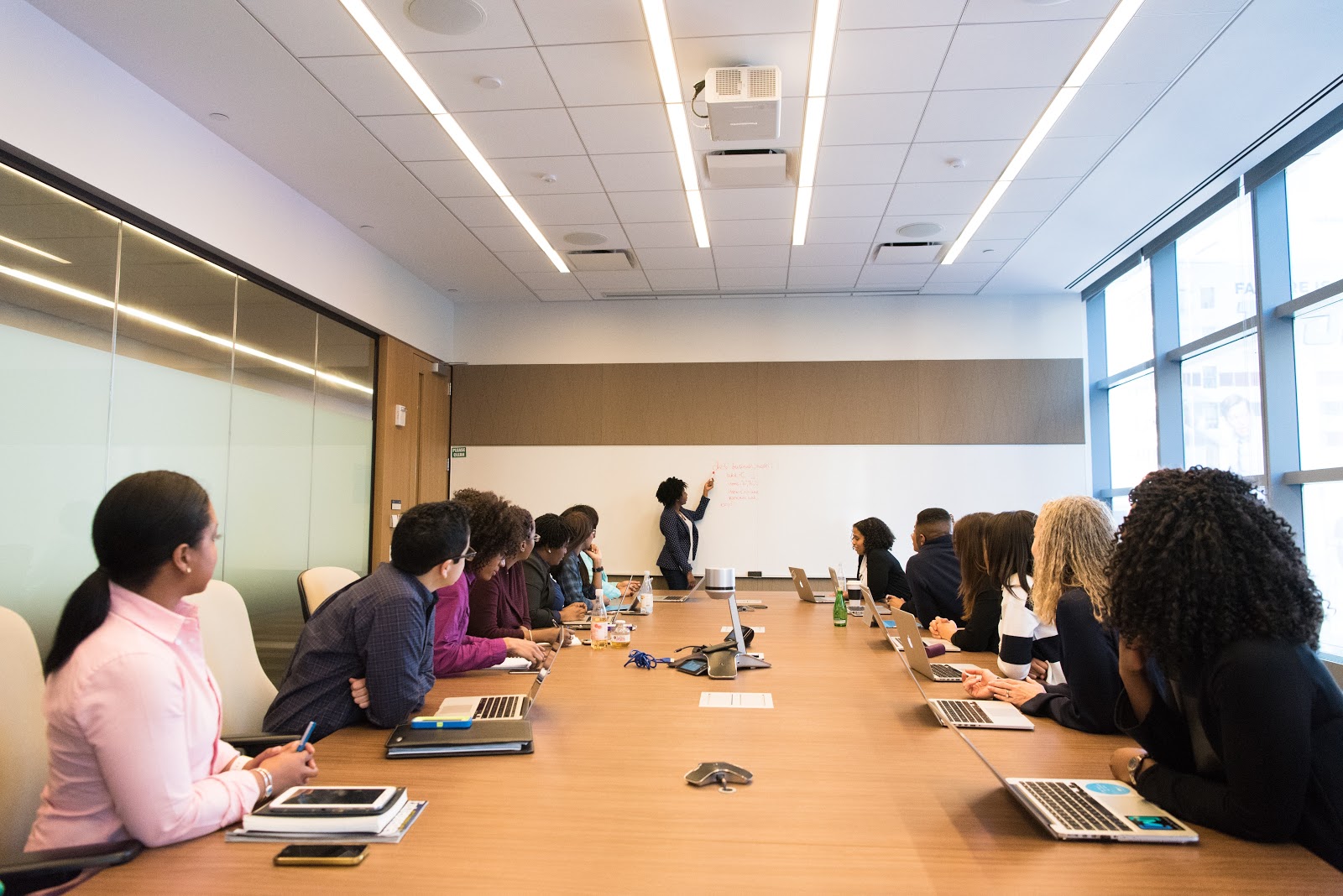 Create a documented strategy for diverse and inclusive marketing

Diversity does not start or stop at choosing diverse images for your marketing; it should go all the way down into the core of your marketing strategy.

This not only makes it easier to spot and select truly diverse images, but it also helps avoid the pitfalls of tokenism or stereotyping (which consumers will see through).

What does a documented strategy for diverse and inclusive marketing look like?

To start, it means creating target audience personas that aren’t homogenous, ensuring your marketing team is diverse and inclusive, and making diversity a core value of your organization.

Questions to consider before creating or selecting an image

Once you’re ready to select an image for your next campaign, it can be helpful to have a checklist to refer to. Here are the questions we recommend you ask before choosing an image:

Asking these questions helps you be mindful of diversity when creating or choosing your marketing images.

Though diversity in your marketing doesn’t begin and end with your images, having diverse images is a clear way to signal to consumers that your organization holds diversity and inclusion as a core value.

To make it easier to gather diverse images, Campaign Monitor has partnered with Unsplash to create a Free Image Gallery of diverse and inclusive stock images right inside your email builder. 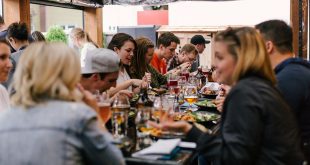 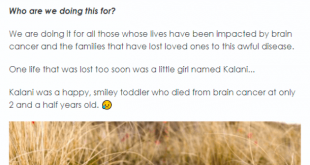 From In-person to Virtual Events: Cure Brain Cancer Pivots With A… 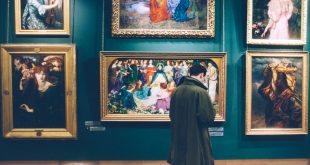 Designing Emails With Images: Advice From a Pro… 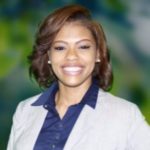 This article is part of a larger series that focuses on diversity and equity in ...