This collection of social media marketing and new hire announcements is a compilation of the past week’s briefs from our daily Marketing Land newsletter. Click here to subscribe and get more news like this delivered to your inbox every morning.

Instagram Marketing Partner caught scraping data. Instagram has sent HYP3R, one of its former ad partners, a cease-and-desist letter after Business Insider revealed the company was scraping user data. According to Business Insider’s report, the company had taken advantage of “configuration errors and lax oversight” on Instagram’s part, making it possible to harvest a high volume of public user data that was meant to vanish after 24-hours.

An Instagram spokesperson said HYP3R’s actions not sanctioned and violated its ad policies: “As a result, we’ve removed them from our platform. We’ve also made a product change that should help prevent other companies from scraping public location pages in this way.”

But HYP3R argues it didn’t break the rules, claiming it was accessing public data and that, “Any issue with Instagram would be resolved shortly.” Business Insider said it is unclear how much data HYP3R accessed, but the company claims it has a dataset that includes “hundreds of millions of the highest value consumers in the world.” Sources connected to HYP3R told Business Insider that more than 90% of that data was from Instagram.

“Our lawsuit is one of the first of its kind against this practice,” writes Romero on the Facebook Newsroom blog, “Facebook detected this fraud as part of our continuous efforts to investigate and stop abuse by app developers and any abuse of our advertising products. LionMobi and JediMobi have been banned from Audience Network and their accounts have been disabled.” Romero said the advertisers impacted by LionMobi and JediMobi’s ad fraud practices were refunded in March of this year.

ProKarma expands offerings with latest acquisition. The digital services company ProKarma has acquired Connective DX, a digital experience agency with offices in Portland, Oregon and Boston, Massachusetts. “Together, we will expand on our end-to-end digital capabilities while defining, designing, and engineering best-in-class solutions that transform businesses and elevate the customer experience,” said ProKarma Co-Founder Vijay Ijju.

“It’s a remarkable fit between our two organizations, and I am thrilled to see the meaningful growth potential with our joint teams and clients,” said Connective DX CEO Paul Williams.

Both companies currently have their headquarters in Portland, Oregon. According to the announcement, the acquisition will help “fuel” ProKarma’s expansion into the Northeast U.S., as well as help build out ProKarma’s content and martech capabilities with the addition of Connective DX’s customer-focused solutions.

Leo Burnett Chicago has promoted Jordan Doucette to Chief Creative Officer, reporting to the agency’s President and Chief Strategy Officer, Emma Montgomery and Leo Burnett Worldwide’s Chief Creative Officer, Liz Taylor. “Jordan’s open approach to creativity helps deliver great work from big, integrated teams and brands. She is a true partner and is the evolution of what a creative leader needs to be in today’s environment,” said Montgomery. Previously, Doucette held the role of EVP/Executive Creative Director at the agency, and was the creative lead for The Kellogg Company and Miller-Coors accounts. In her new role, she will continue as the creative lead for marquee clients and oversee the agency’s creative and production departments.

Saad Rehmani has been named Vice President of Engineering at Reddit. He is tasked with scaling the company’s engineering organization, optimizing site performance and supporting the launch of new features on the platform. “With the growth of our engineering teams in recent years, we knew we needed someone that had proven themselves in leading large teams with a focus on staying flexible and nimble. Saad has the right mix of experience to evolve and support our teams as they tackle our ambitious plans for the future,” said Reddit CTO Chris Slowe. Rehmani comes to the social platform with more than 15 years of experience leading engineering teams, most recently as the VP of Engineering for GrubHub.

Veracode, an application security testing platform, has named Elana Anderson Chief Marketing Officer. She will report to CEO Sam King and lead the technology company’s global marketing, branding and communications programs. “Elana’s success building global brands in established and emerging markets is a testament to her deep technology expertise and marketing prowess. She is a proven executive with boundless energy and innovative ideas that will help us further our mission to help our customers change the world securely and drive the next chapter of Veracode’s growth,” said King. During her career, Anderson has served as the CMO for Vidyo and SVP of Worldwide Marketing for Demandware.

Craig Stimmel, the former head of digital media and global partnerships for P&G, has been recruited by Snap to serve as its new head of brand partnerships. Based in Chicago, Stimmel will lead efforts to gain bigger budgets from Fortune 500 brands on the social platform, according to Business Insider. Stimmel was with P&G for more than eight years. During his time there, he led efforts to bring more media buying in-house and gathered first-party data from P&G’s own platforms.

Paradigm Talent Agency has named Lori Feldman as its first chief marketing officer. In her new role, Feldman will lead brand partnerships and marketing efforts for clients in the music area, as well as work on enhancing brand and partnership opportunities for the agency’s talent and literary clients. “She is an innovative thinker with vast experience working with artists and brands to create cultural moments that resonate around the world,” said Paradigm CEO Sam Gores. Before joining Paradigm, Feldman served as the executive vice president of strategic marketing for Warner Records.

Pet food company WellPet LLC has appointed Clark Reinhard as its new chief marketing officer. Clark will be charged with accelerating global growth across WellPet’s family of brands and oversee brand management, marketing, advertising and public relations for a number of the company’s product lines. “We’ve strategically invested in brands that are shaping the pet nutrition category and are putting team members in place uniquely experienced to help them flourish,” said the company’s CEO Camelle Kent. “There’s no doubt in my mind Clark will do just that for all of our brands at WellPet.” Reinhard previously led growth strategy efforts, marketing and product innovation at Ocean Spray.

Amy Gesenhues is a senior editor for Third Door Media, covering the latest news and updates for Marketing Land, Search Engine Land and MarTech Today. From 2009 to 2012, she was an award-winning syndicated columnist for a number of daily newspapers from New York to Texas. With more than ten years of marketing management experience, she has contributed to a variety of traditional and online publications, including MarketingProfs, SoftwareCEO, and Sales and Marketing Management Magazine. Read more of Amy’s articles. 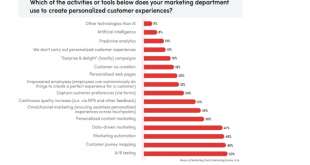 Rethinking your strategic planning for 2021…

What is broken that a CDP will fix?…

Your exclusive MarTech preview is here…

Your exclusive MarTech preview is here ‘); Your privacy means the world to ...