From Sold Out Venues to Online Streaming: How Frontier Touring Pi…

Known as one of the largest concert promoters across Australia and New Zealand, Frontier Touring has continued to establish itself as a respected and long-standing brand over the past four decades.

With roots reaching back to 1979, Frontier Touring has earned its success promoting the most anticipated tours in Australia and New Zealand.

However, in more recent and unpredictable times, the strength of the brand has been put to the ultimate test. With restrictions on large, in-person events, the Frontier Touring team is learning to lean on intuitive thinking. And with a little flexibility and support from their email marketing program, the brand has re-established itself on a foundation built to weather any storm—even a global pandemic.

From sold-out venues to online streaming

Before COVID-19 made its way across the globe, the Frontier Touring team was gearing up for an exciting summer season—the biggest time of the year for the touring industry as a whole. With plans in place to ride out another successful summer, the arrival of the coronavirus was both a shock to the brand as well as a devastation for many loyal concert-goers and eager rising artists.

National health mandates dictated the destiny of many tours, resulting in last-minute cancellations which could lead to communication chaos. Throughout this time, Frontier Touring leaned on email to keep their audience updated on the latest safety procedures and tour cancellations, postponements, and reschedules, always ensuring that fans received information as quickly and efficiently as possible.

Although the team was hopeful for a shift back to normalcy, they also recognized the fickle nature of that desire. And, instead of banking on a nationally mandated change, they began to brainstorm ways they could take advantage of their digital presence.

Digital Senior Manager of Frontier Touring Sarah Dileo says, “the start of COVID-19 kicked off a period of uncertainty for us all, both personally and professionally. The nature of live music and events means that we are often planning months, and sometimes years, in advance. The ever-changing nature of COVID-19 and the subsequent restrictions and regulations meant that we no longer had that luxury; we had to make decisions and announcements much more quickly than usual, and ensure that our community and ticket holders were advised of them in the clearest, most concise and speediest way possible.”

The Frontier Touring audience is made up of music lovers, who live for the transcendence that accompanies the live performance experience. And as a brand, it’s Frontier Touring’s primary mission to connect that lively audience with artists who are thirsting for exposure. To continue to meet this goal, Frontier Touring parent company, Mushroom Group introduced Music From the Home Front, The State of Music and The Sound.

Accessible via YouTube and live television, Music From the Home Front aired as a one-off broadcast event on Anzac Day, and welcomed over 1 million viewers. The State of Music was featured as a six-episode series, broadcasted weekly on both Facebook and YouTube, and boasted a combined viewership of 2 million+. And The Sound debuted as a six-episode television series that Mushroom Group produced with ABC celebrating the Australian music scene with exclusive live performances and interviews. 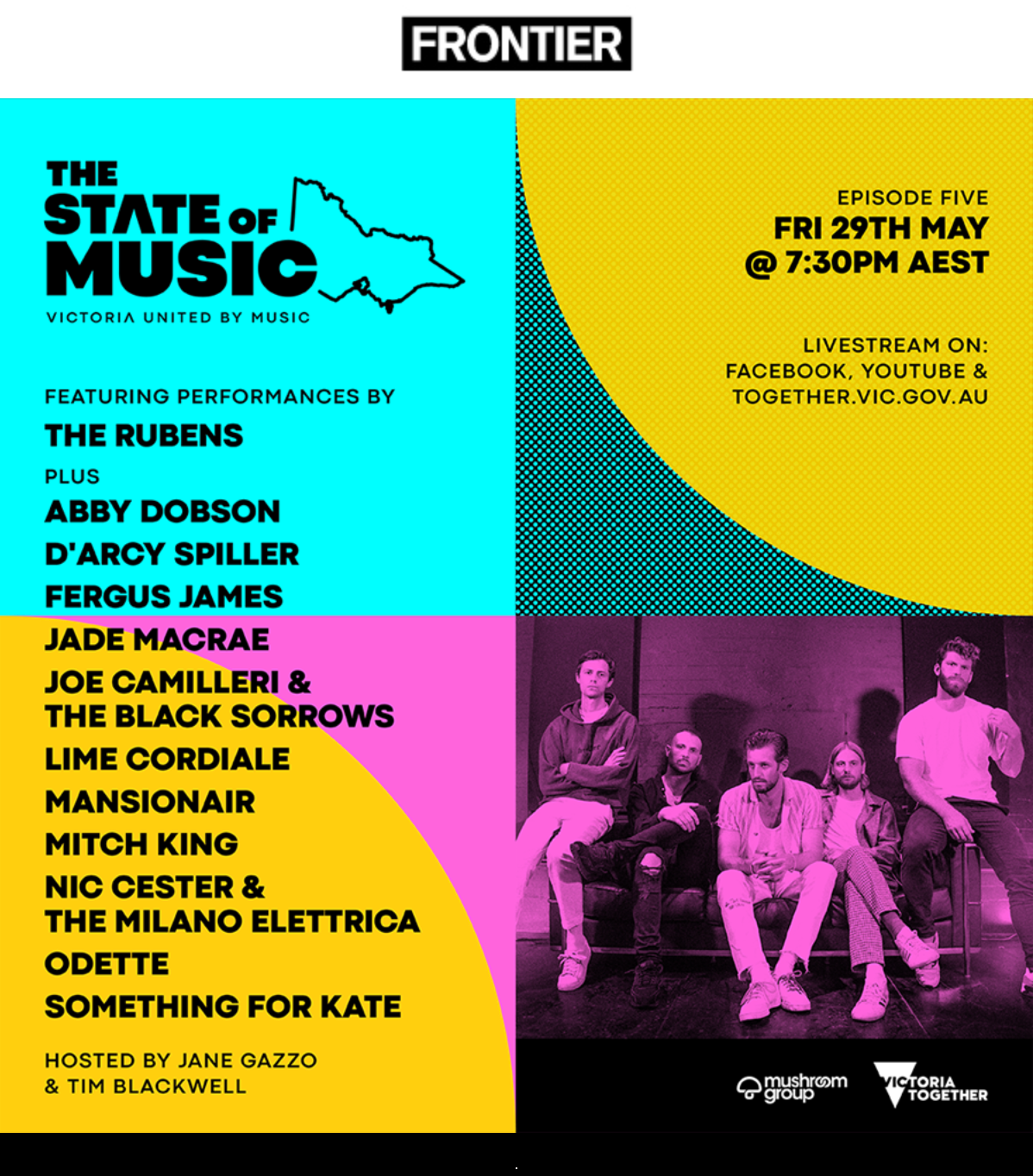 COVID-19 changed the content, but the message stayed the same.

Recognizing that a shift in content would be their key to continued engagement, the Frontier Touring team revisited their strategy to be sure subscribers could get the most out of every send. Instead of a call to action to purchase tickets for an upcoming tour, there are now links to Youtube and social accounts for virtual attendance.

The team also has a hand in reminding audiences of their love for artists and live events by offering a link to donate to Support Act and MusicHelps, two local charities within the music industry that are raising money for artists who are affected by COVID-19 and sharing other ways to help support live music. 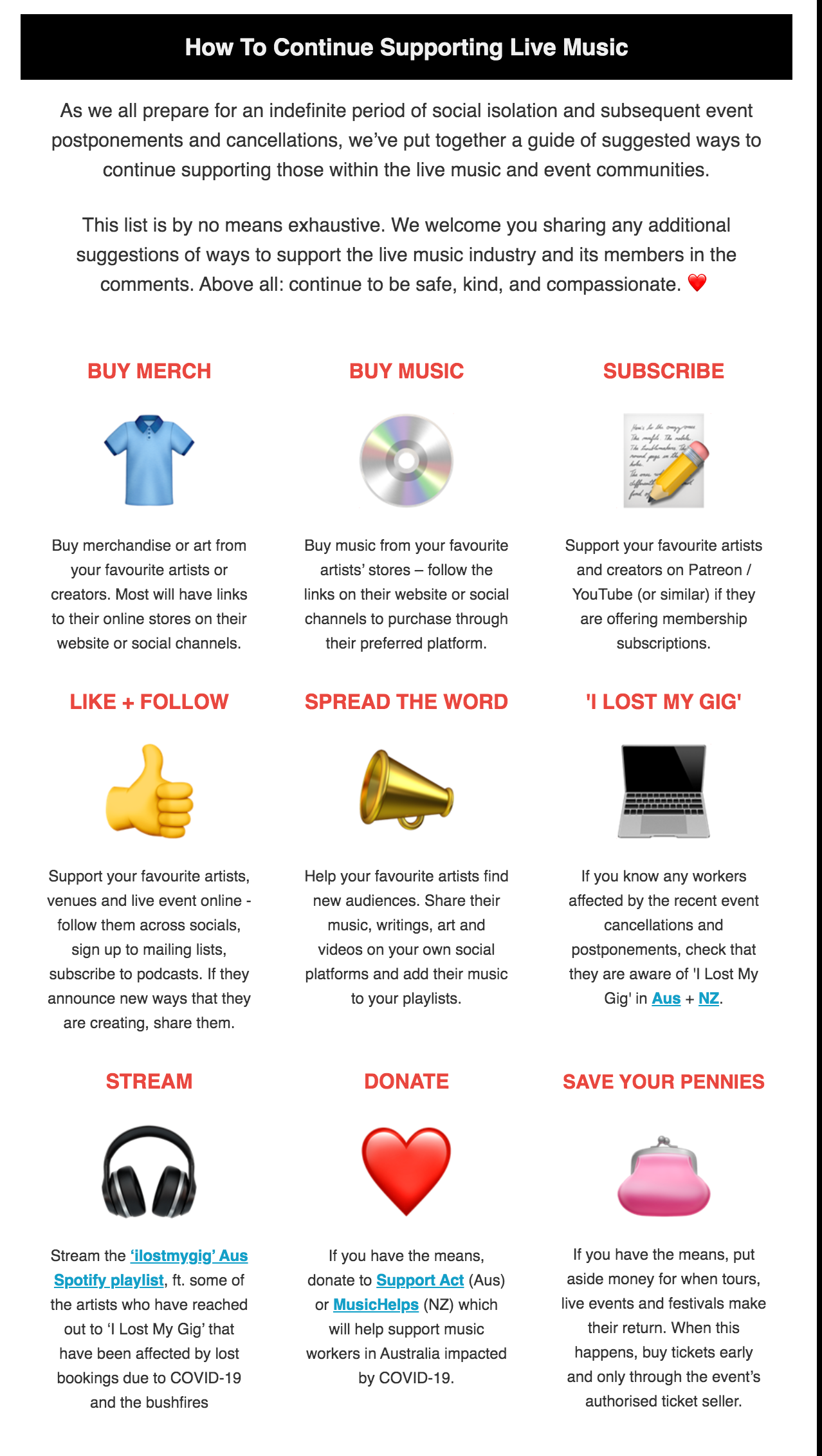 Quick thinking and easy-to-use tools make for a successful shift in strategy.

As for most brands, Frontier Touring’s overall email strategy drastically changed as a result of the pandemic. Monthly newsletters shifted to communicate all of the upcoming tours and the current status on those tours.

More recently, the team is now using these monthly updates as an opportunity to engage with their audience in ways they never had before. Many newsletters now feature artist highlights, which introduce subscribers to new music and offer updates on what their favorite artists are currently up to.

In the past, Frontier Touring relied on a template to create monthly newsletters. But with such rapid changes occurring so frequently, Campaign Monitor’s drag-and-drop editor was their saving grace when it came to pushing out new information—and getting it out fast.

Dileo says, “We have no idea how to predict what’s going to happen next, so Campaign Monitor has been very helpful for us when we are acting fast to get out ever-changing information. There’s no better way to communicate with people directly than with email. And direct communication is really important when we’re talking about a tour for the following week that has been cancelled, postponed or rescheduled—that information has to get out fast.” 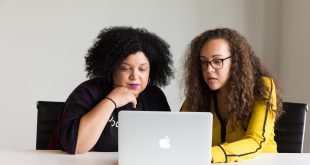 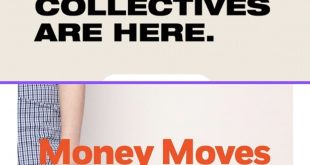 “Hands down, the Best User Experience”… 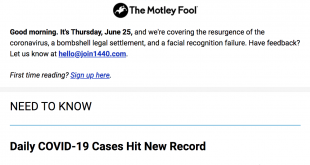 Stats to brag about: How 1440 Media hits high open rates… 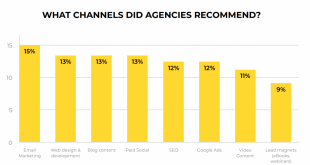 Despite its position as one of the oldest digital channels, agencies love email marketing.  At ...